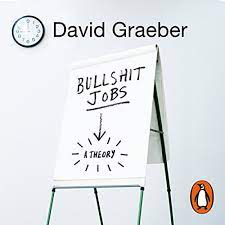 One of my favourite books is by the late anthropologist David Graeber and is catchily entitled “Bullshit Jobs – A Theory”. It postulates that more than 70% of the jobs currently held by people in the developed (hah!) world are completely unnecessary and have zero positive impact on their holders, the employers, the business, its customers or anyone at all ever. And that 50% of the people doing these bullshit jobs are fully aware of their irrelevance. Scary stuff. I have just come off LinkedIn and my considered opinion is that Mr Graeber underestimated the percentage. My feed is filled with people who appear to do nothing but publish ridiculous polls and then talk about how impactful the poll was. And then other people, to whom clearly not even their dog listens, who post facile comments under the vapid posts. Just for the record here is a dictionary definition:

the capacity to have an effect on the character, development, or behaviour of someone or something, or the effect itself.

When your post provokes someone with the intellect and memory of a goldfish to click a vote button, that is not influence. It’s a measure of how mindless your network is. For many years I haven´t understood why businesses pay people to do jobs that generate no positive impact. Nowadays I don´t even understand what the job description means. And often I don´t understand how the business could hope to survive. And I never have an idea how a perennially loss-making business could have a valuation in the billions.

I think that the truth is that most people are too scared of looking stupid and so won’t question the absolute lunacy of many of the businesses that claim to be wonderfully disruptive and are actually just desperately bad.

More than 95% of the investments that I look at are nonsensical. They either return so badly they are effectively loss-making (banks), pay so much that they are doomed to fail, or are cloaked in the aforementioned aura of disruption, tech and game-changing in order to obscure the fact that they are run by people without an iota of real-world experience or a basic business plan. All of the above will come with Investment Memoranda that would confuse an investment committee made up of Stephen Hawking, Warren Buffett and Albert Einstein.

So here is my theory and the best bit of investment advice you will ever get. Bullshit investments are always scarily complicated, impossible to understand, and missing a description of the basic business premise.

If you don´t understand it fully and believe it intellectually don´t do it. This concludes the lesson.